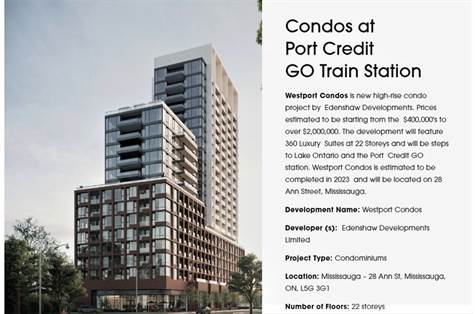 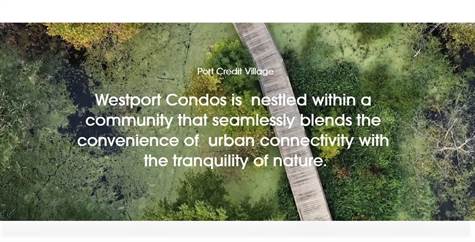 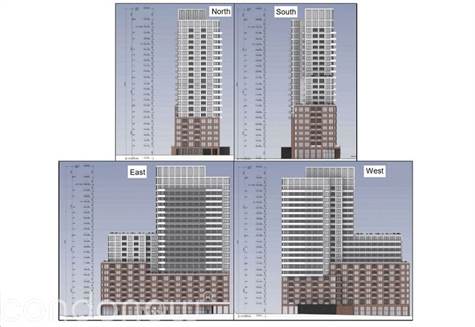 Introducing Westport Condos, a brand new condominium coming soon to Mississauga's beloved Port Credit neighborhood where nature, entertainment, and convenience all come together. A highly desirable location for those seeking a vibrant urban lifestyle, Port Credit offers fantastic amenities where the Port Credit GO Station , MiWay Transit , the upcoming Hurontario LRT, QEW, entertainment, shopping, dining and a great assortment of natural amenities are only just moments away. Westport Condos is a high-rise condo project by Edenshaw Developments . Prices estimated to be starting from the $400,000's to over $2,000,000. The development will feature 360 Luxury Suites at 22 Storeys and will be steps to Lake Ontario and the Port Credit GO station .

Location - just a 3-minute walk from the Port Credit GO Station where you will have access to both GO Bus & GO Train Transit allowing you to seamlessly travel to Downtown Toronto’s Union Station in 20 minutes!

Located in Port Credit, the heart of Mississauga’s entertainment hub for shopping, events, music, and dining on the waterfront, where you will have over 400 unique businesses to explore!

6 Minutes from CF Sherway Gardens which features over 200 stores, services and restaurants for you to enjoy as well as a number of Big Box Stores in the surrounding area such as: Walmart, The Home Depot, Costco, Best Buy, Canadian Tire and more!

Conquer your morning commute with ease being just 5 minutes from the QEW seamlessly connecting you to Highways 427, 401, 407 & 403 allowing you travel throughout the GTA with absolute ease

10 Minutes from Square One Shopping Centre , Canada’s second largest shopping centre, which has more than 360 stores and services for you to enjoy and has recently has gone through a $380 Million Expansion

Close proximity to Humber College - Lakeshore Campus & the University of Toronto Mississauga Campus when combined are home to over 20,000 students

Brokered and Advertised by : Right At Home Realty Investments Group Brokerage
P2#403154786
top
Information is deemed to be correct but not guaranteed.